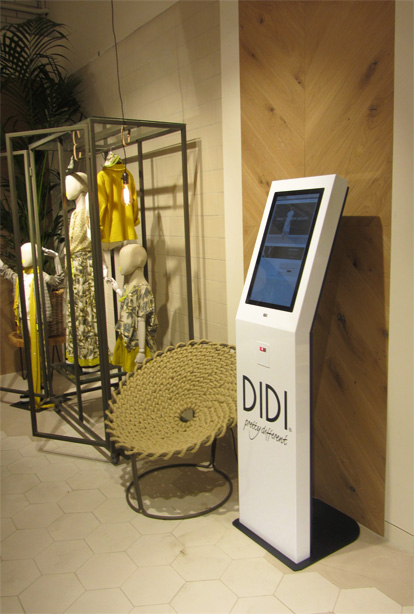 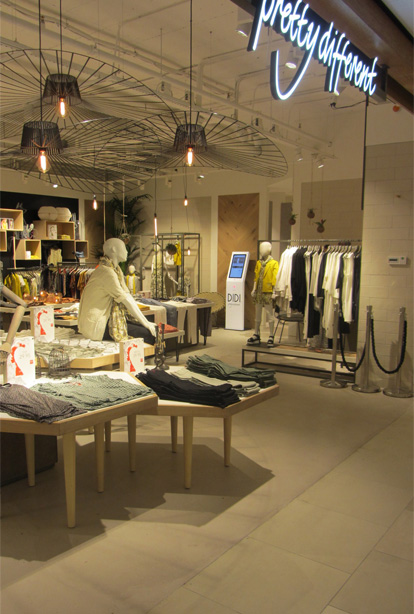 Fashion brand Didi opened its new webshop at the beginning of 2015. That also involved a new omnichannel strategy: clothes that are no longer available in the store can be ordered directly from the webshop, and the customer then pays for the entire order in one go. A welcome service for the customer, according to ICT manager Wilco Nierop. In partnership with diz Didi designed free-standing kiosks, and it is expected that they will be rolled out in all ninety branches from September.

“Didi’s customers often order clothes in sets: trousers and a sweater that go well together, for example. If the trousers turn out to be sold out, thanks to the in-store kiosk that’s no longer a reason for deciding against the whole outfit.”

“At first customers could have an sold-out article ordered by our cashiers, but this often led to long queues. Customers paid, orders were placed and items were wrapped at one till: that had to change. Then we came into contact with diz through one of our business associates. The idea for free-standing kiosks was actually born after our first meeting. We began with one kiosk for our test store in Heerhugowaard, but kiosks were soon standing in two of our concept stores too. The plan is to have a kiosk in every Didi branch – ninety in total – from September.”

“We deliberately chose not to install a payment terminal in our kiosk. If a customer buys an item of clothing in our store and another item that is out of stock via a kiosk, we want to make it easy for them, so not paying at the till for what you buy in the store and paying at the kiosk for what you order online. Now customers pay the whole amount at once at the till, with one receipt for all the articles.
diz really thought along with us in our discussions about the placement of a kiosk. For example director Bas Hillen recommended a screen in portrait mode; a “standing” screen. In this way you can show a lot more information on your screen, something we hadn’t thought of ourselves.
We ultimately decided on a standard model, the diz1122, because of the price, but also because it simply meets our needs and other retailers have had good experiences with it. Our store staff also find it really nice to work with.
Where that’s concerned, diz director Bas Hillen knows what he is talking about. He makes good use of his references, and that is very valuable in the retail world. This sector relies very much on others retailers’ experiences.”

“The great thing about diz is that they think along with you. During one of our meetings we suggested to diz that we place scanners in the spot where there are normally payment terminals. So if for example a blouse is no longer available in the store in the right size, then the customer can use the scanner and order the right size straight away at the kiosk. diz got down to work on this proposal straight away.
We also want to build in very specific software in all our kiosks. If a kiosk in a store has problems – anywhere in the Netherlands – we want to be able to take a look at the problem from our head office: assistance at a distance, you might say. diz freely admitted that they don’t often work with such specific software. They search hard for a solution, but they’re always honest with us, and we value that enormously.”